The “Arrastre de caudas”, an ancient Catholic ceremony commemorating the crucifixion and resurrection of Jesus Christ, is held every Wednesday of Holy Week  in Quito, the only city in all of the world where this ritual still survives.

This ceremony has its origin in an ancient Roman rite in which the army would pay tribute to generals who died in battle. It was believed that through the ceremony, the virtues of the  “fallen general” would be passed on to his soldiers. During the Arrastre de caudas in Quito, the fallen general has been replaced by Christ.

The ceremony, brought to America during the Spanish conquest, was celebrated until a few years ago in the cathedrals of Lima and Seville, but now only endures in Quito.

The “caudas” are long black cloaks, almost five meters long, that hang from the necks of those priests chosen for the ceremony. The robes drag along the floor of the incredible Metropolitan Cathedral of the Ecuadorian capital.

More than a thousand faithful believers crowd this church to observe the passage of the priests and their long tunics through the corridors of the Cathedral, in a ceremony accompanied by the old wind organ that intones a funeral song.

The religious walk slowly and the faithful lower their heads as a sign of repentance. 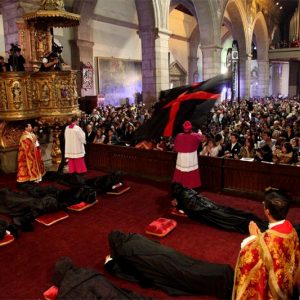 Then, the chosen priests arrive in front of the altar, after the walk down the aisle, and kneel, while another priest waves an immense black flag with a red Christian cross in its center.

Those who were kneeling, then prostrate themselves in front of the altar and the priest waves the banner over them. The waving black banner normally will also touch the heads of the observants who have managed to get very close.

Then the clergy rise from the ground to remember Christ’s resurrection and take their seats on the chairs surrounding the high altar to begin the rest of the liturgy.

The entire Arrestra de caudas ceremony feels like a funeral, with dark lighting, the smell of incense and smoke, and sacred music in the background.

Source for the title image.